Sonmez Cement Building and Mining Industry and Trade Inc. which was established with the partnership of Sonmez Holding, KUTLUCAN Companies Group and TURKUN Holding, commenced the production in Adana Yumurtalik TAYSEB Free Zone in October 2014.
The factory, the construction of which was commenced in December 2012, has been designed in compliance with the Contemporary Environmental Legislation with state-of-art dedusting systems, and it is proud to be a green factory with the utilization of alternative fuel and renewable energy sources.
Sonmez Cement, which is very close to the raw material sources on its site of 413 decares and 220 employees, is the first cement factory in Turkey which has received the permit of establishment within a Free Zone. Additionally, the factory delivers the best service to its clients by taking the advantage of being only 4.5 km distant from the port. Sonmez Cement will reinforce its competitive advantage even more with the port project expected to be completed at the beginning of 2016.
Target markets of Sonmez Cement consist of the global market, particularly North Africa, West Africa and South America. With its wide array of portland cement products, Sonmez Cement distinguishes itself from its competitors by producing low alkaline cement for South American Market, and low chrome cement and sulfate resistant cement for North African Market.
Sonmez Cement, which will have an annual production of 1,7 million tons of clinker and 2 million tons of cement, will export 85% of the products to make a positive contribution to the 2023 export targets of our country. Sonmez Cement will play an important role in Turkish cement importation as a strong brand within its region in 2015.
Sonmez Cement Building and Mining Industry and Trade Inc.
Headquarters: Yeni Yalova Yolu 9.Km Sönmez Holding Tesisleri Osmangazi / BURSA
Branch: Adana Yumurtalık Serbest Bölge Şubesi (Adana Yumurtalik Free Zone) Ceyhan / ADANA
Tel: 0 322 634 21 70 Fax: 0 322 999 33 22
http://www.sonmezcimento.com.tr 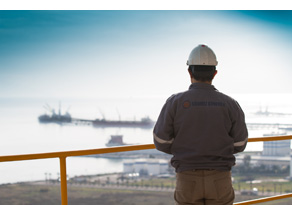